I love to travel to Europe. Period. Aside from the obvious fact that I’m of European descent, I’m not really sure why I love it so much. I don’t have any known relatives there, but I go every chance I get. And I am lucky enough even to get to go for work every once in awhile. 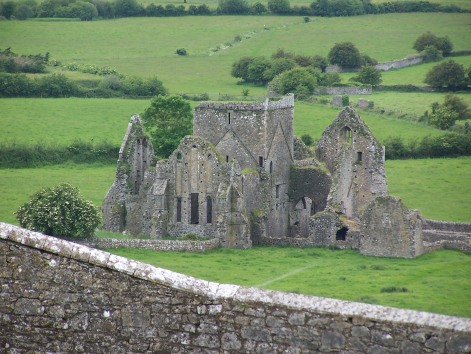 So we made our second trip to Ireland a couple of weeks ago. We flew into Dublin, drove to Waterford, visited the magical picture post-card town of Kinsale and slept in a converted old convent in County Tipperary where roosters crow at 4:00 in the morning. We made our way through Kilkenny Castle and walked around the gorgeous little town of Kilkenny boasting a pub that houses the ruins of a 16th century abbey brought over from England. How crazy is that?! And we ate amazing food all along the way.

We were loosely tracing John’s ancestral heritage. His great grandfather, Patrick Tobin came over on the boat in 1868 with his new bride, Margaret Breen Tobin. We visited the church where Patrick was baptized in 1842, and one where John’s great aunt and uncle were married!

But we ended our Irish journey where it began–reflecting on the lives of those who came before.

Those who know me well, won’t be surprised, but Glasnevin Prospect Cemetery was our last stop. It is a short bus ride from Dublin and was opened in 1832, ten years before Patrick Tobin was born. Originally established so Catholics could have proper burials (it was against the law to have Catholic masses in Protestant cemeteries), it is the largest non-denominational burial place in Ireland with an estimated 1.5 million burials.

To be sure, somber Prospect Cemetery isn’t as ornate or cheerful as Paris’ Pere LaChaise Cemetery where Irish son Oscar Wilde rests today. But there’s something gritty, determined and stalwart about its personality. You can actually feel it here, as the ground shelters remains of members of a collective people who suffered and struggled for liberty so long under such great oppression and injustice. According to cemetery records, there are a few Tobins who were buried here in the last 50 years, but we didn’t find them.

During our visit, there was a funeral procession being led by two sleek, black stallions pulling a glass carriage that held a wooden coffin. Out of respect, I didn’t take pictures.
But it was breathtakingly beautiful.

And so our trip is over, but it is far from the end of this journey. Until we return to Ireland–as surely we will because it is a land that calls to us–I’ll continue to look for ancestral clues and think about the past that shaped our present.